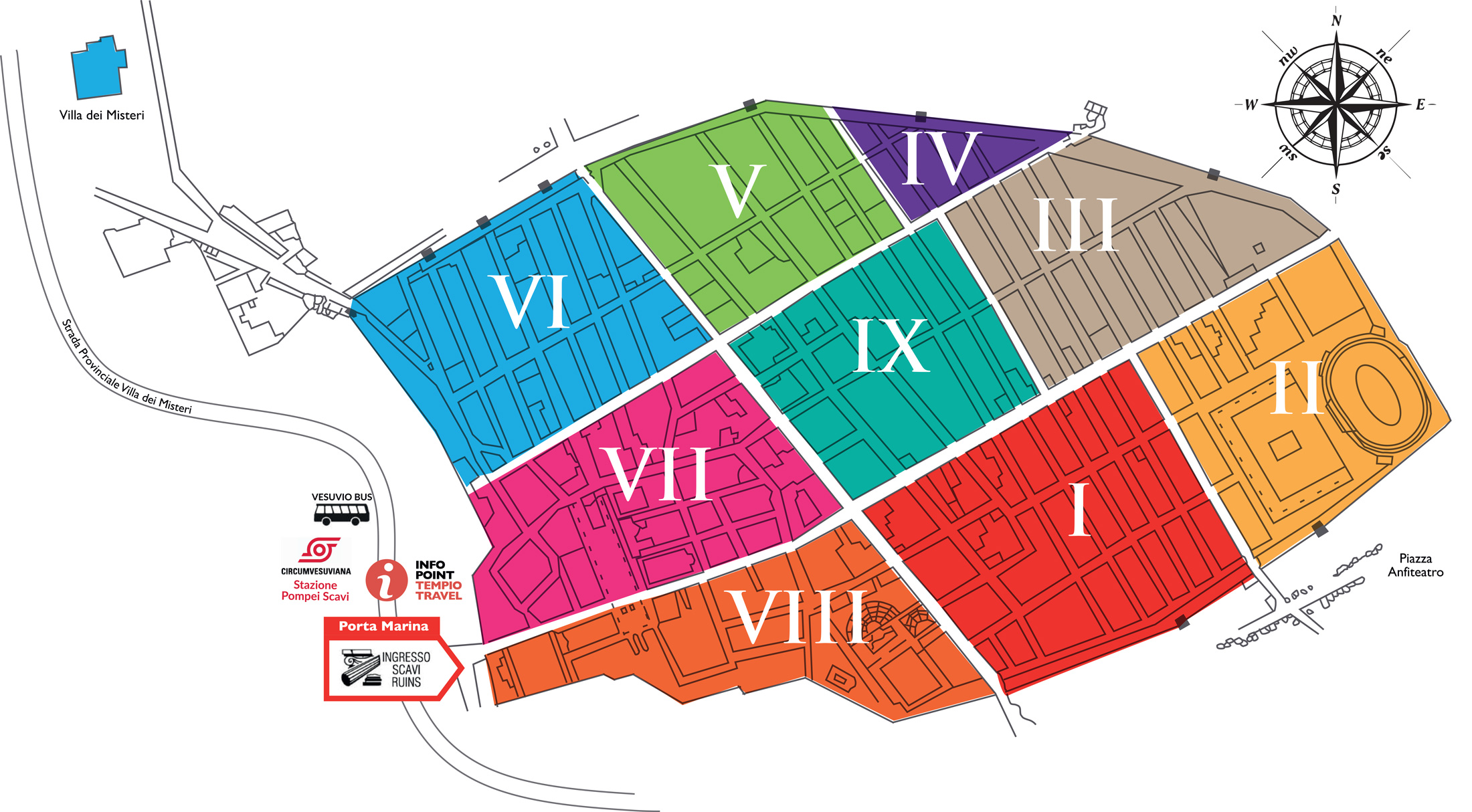 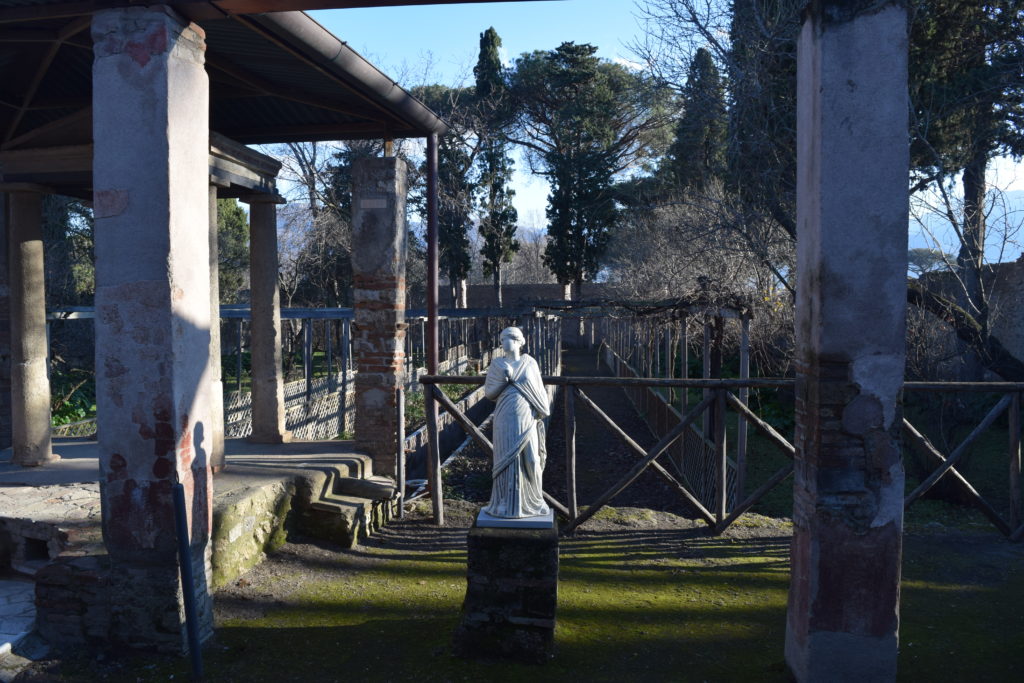 The house of Octavius Quartio, also known as the House of Loreius Tiburtinus was first excavated in 1916 with subsequent excavations during the period 1933-35 and in 1971. The property is an impressive building with substantial decorative remains and an extensive garden to the rear.
The entrance, with its stone seating for the patron’s clients, is flanked by two shops (originally two rooms of the property). In the doorway are casts of the doors.
Some of the the pictures show Actaeon discovering Diana Bathing and Actaeon being attacked by Dogs and mythological figures. The triclinium is richly decorated with scenes from the Illiad.
On the rear wall of the biclinium are two frescoes, one either side of the fountain. The subjects of both frescoes – Narcissus at the Spring and Pyramus committing Suicide – share a common theme: death brought on by passion. The artist who painted the pictures was a Roman, who signed ‘Lucius pinxit’, ‘Lucius painted this’. His signature, sadly, is no longer visible.
Along the canal is a monumental followed by a small temple

House Of Venes In The Shell

This house is also known as the House of D. Lucretii Satrii Valentes, it was still being restored when Vesuvius erupted in AD79. Excavated between 1933-35, it was damaged by bombing during World War II in 1943. It was re-excavated and restored in 1952. The south side of the atrium opens directly onto the peristyle which encloses the internal garden on three sides. The rear wall of the peristyle bears the large frescoes after which the house was named, can be glimpsed beyond the shrubbery. The central painting on the rear wall is of Venus lying in a conch shell with a nymph either side of her. The nymph on the left side of the painting is shown riding a dolphin while the one on the right supports the conch shell. The work has been done with vigour and flair and provides an extremely colourful and dramatic backdrop to the garden.

First excavated between 1754-57, the house was subsequently re-buried after much damage had been done. It was re-excavated and restored in 1952-53. The house and gardens occupy one of the largest plots in Pompeii, taking up virtually an entire block. After the earthquake of AD62, Julia Felix, must have decided to rent out part of the house along with opening her private baths to the general public. On the east side of the atrium a door leads to the service area for the bath complex. Completing the baths complex is a large open air pool and a furnace room or m, unroofed, contained the furnaces required for heating the warm and hot rooms of the adjoining private bath suite located on the other side of the south wall

Excavated between 1813 and 1972, the foro boario was a trading area where cattle were sold and where vines were grown. 10 terracotta amphorae have been found which contain up to 120 hectoliters. Still today the area is rich in vineyards from which excellent wine is produced. 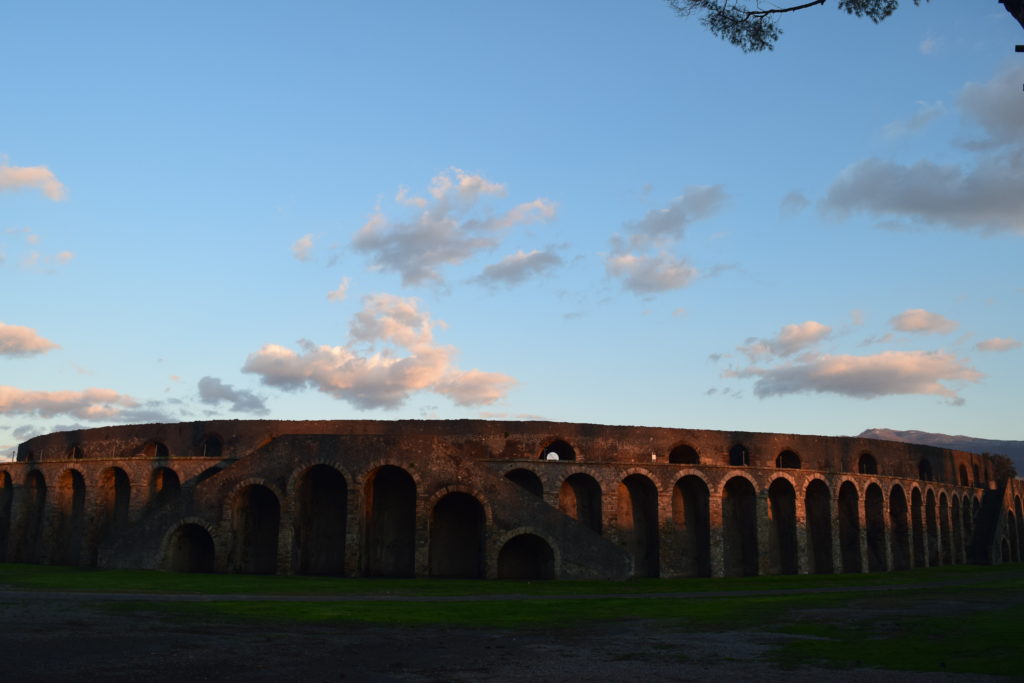 Excavated between 1748 and 1814. It was completed in 80BC, having been commissioned by two magistrates, C. Quintus Valgus and M. Porcius (these two magistrates also commissioned the Small Theatre, or Odeon). An impressive structure, the amphitheatre measures approximately 135 x 104 metres and could hold about 20,000 people. It is the earliest surviving permanent amphitheatre in Italy, and is therefore particularly important in providing a picture of this type of typically Roman architecture. The amphitheatre is sited in the most easterly corner of the city, presumably because the area was still free of buildings at the time

It dates from the Augustan era and occupies an hugh area of approximately 140 x 105 metres. It is widely believed that this large sports field was Pompeii’s response to Augustus’ call to improve the moral and physical condition of young men in the upper classes, but there is little surviving evidence to support this view. The palaestra consisted of a central area for sporting activities surrounded by a high front wall and a three sided colonnade Although there is little evidence to show that a collegeum was permanently established in the palaestra, there is evidence, in the form of several graffiti, that it was used as a site for games and athletic contests. Framing the open area on three sides were two rows of plane trees which must have offered welcome shade in the summer heat. The surviving roots provide substantiating evidence as to the age of the complex. At the time of the eruption the trees were almost 100 years old which ties in with a date in the early years of the Augustan principate. The rows of trees have recently been replanted as part of a programme to recreate the green spaces of Pompeii.

House Of The Summer Triclinium

The house of the summer triclinium has a garden with two niches richly decorated with shells, glass paste and pumice stone from which the house takes its name. Excavated between 1933 and 1955, its garden, with its vineyards, still exists. The modern vineyards are treated with the same techniques of the time.

House Of The Garden Of Hercules

The House of the Garden of Hercules, also known as the House of the Perfumer was initially excavated in 1953 and again in 1971 and 1987. Some restoration work was carried out the following year in 1988. The large garden was laid out in the middle of the 1st century BC, and replaced as many as 5 of the surrounding properties. Analysis has shown that the land was primarily used to grow essences suitable for making fragrances, making it likely that the owner was connected to the perfume trade. Scented species such as roses, lilies and violets were cultivated. The importance of perfumes in daily life is evidenced by the fresco of cupids as perfumiers in a series of scenes In the middle of the east side of the garden is an outdoor m. Next to it on the adjacent wall were found an altar and an aedicula dedicated to Hercules, of whom a marble statue was found, giving the house its name. 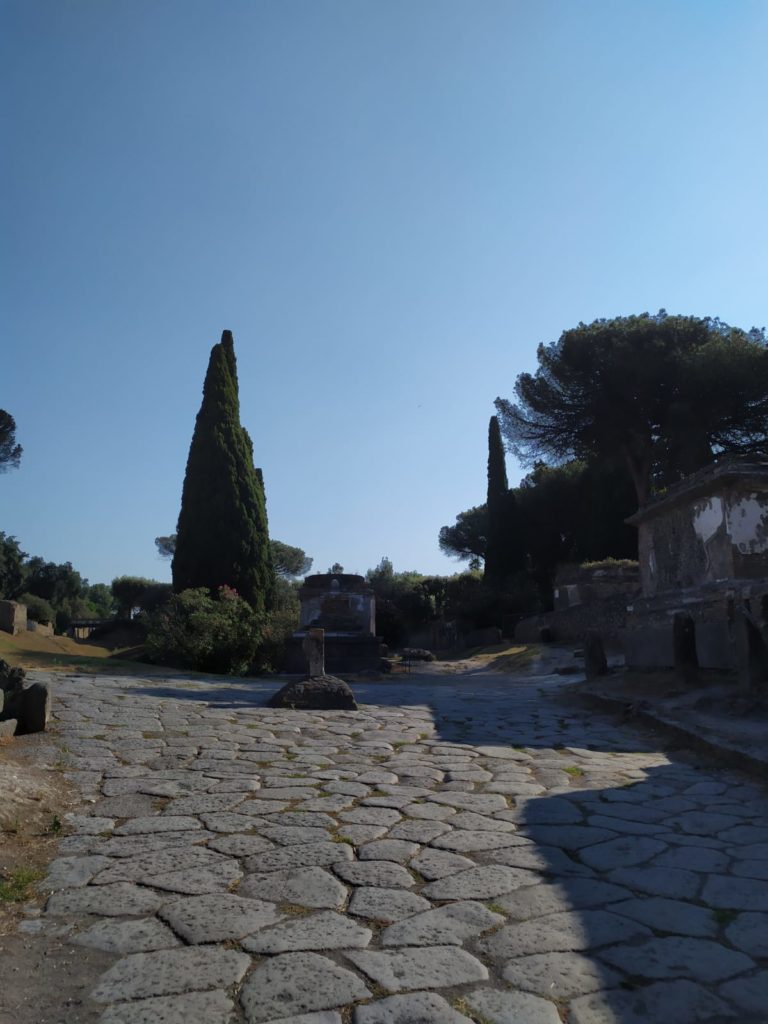 The Nocera or Nuceria Gate is situated along the south eastern flank of the city’s walls at the southern end of the Via di Nocera. The gate in its original form dates back to the Samnite era. In construction the gate resembles the Stabia and Nola gates with a single barrel-vaulted space containing the gate, followed by a passage with bastions at either end to protect the entrance. The gate today is oddly high due to the fact that the road bed was lowered at some time to decrease the steepness of the approach.

Immediately outside the Nocera Gate is one of the city’s major necropolis. This necropolis consists of a series of tombs lining the Via Nocera. There are several types of tombs to be found in the necropolis: chamber tombs, cube tombs, altar-shaped tombs, aedicule tombs, and these tombs range chronologically from the early Republican period right up to the last years of Pompeii. In contrast to today’s cemeteries, which are set off from areas frequented by the living and rarely visited, Roman cemeteries were fairly bustling with activity. As evidence of this, there are over 180 graffiti painted and scratched onto the Nocera Gate tombs, ranging from political slogans to adverts for games at the amphitheatre. These texts provide a rare glimpse of life beyond the walls, and demonstrate that this cemetery was itself a distinct neighborhood, though one integrated with the city itself.